Invasion of the Monkeys

With so much sadness in the world right now, I felt I should use my blog this week to make you smile.

To make us both smile.  Those images from Ukraine are so devastatingly sad and the constant news updates are really taking their toll, so let’s leave all that behind for a few moments and head to Bali. 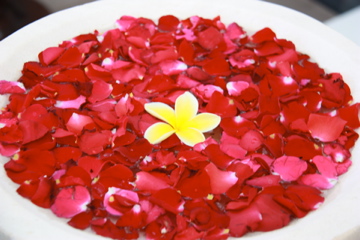 I have stepped into the archives and pulled out my old ‘diary updates’ or some may say, my ‘tales of misadventure’ and thought it might be fun to revisit some of my older trips.

It was a short break in Bali – if I remember correctly, we were scheduled to have a Business meeting in Malaysia the following week, so I decided to take advantage and enjoy a short solo trip beforehand.  I mean – why wouldn’t you?   I only went for 4 days so didn’t do very much in the way of exploring outside of the Hotel – this was my first sunshine break in about a year so I decided to just kick back and do nothing at all.

On my first day at the Hotel, I had one of those ‘Pretty Woman’ moments.  You know the one where Julia Roberts goes running around the room like a child and leaping up onto the bed after realizing she would get to stay at the luxury hotel for a week with Richard Gere? – well I did just the same.

Let’s be clear… there was no Richard Gere in my version of the story, but apart from that, I’m sure the feeling was much the same.  As the Hotel receptionist guided me around my villa pointing out all of the essential features, I remained fairly composed – as though I stayed in Hotels like this every week (no chance).  But the moment he left, I was off.  No stopping me.  Like a little child out of control!   The place was just heavenly.  Perfect for my few days of relaxation.

And I even had my own pool.  Can you imagine!  An infinity pool, which was at a height equal to the patio doors of my bedroom. So when you look out, it kind of felt like the room was also immersed in the water.  Just amazing.

After taking a few photos and getting unpacked, I decided to go have a look around the Hotel.

After wandering around the grounds and stopping to have some lunch, I made my way back to the villa and was surprised to note that there were quite a few things ‘out of place’.

Some of the flowers were now scattered on the floor, a piece of fruit – broken open and lying on the coffee table– things just didn’t seem quite the same as when I had left it.  Of course, I had gone out and left the patio doors open, so just assumed that the wind had caught these items.  Didn’t think too much more of it.

Next day, I was stretched out on a sunbed at the villa, listening to the sound of the water from the pool and enjoying my book when all of a sudden a monkey appears over the perimeter wall.  He heads straight through the patio doors into my villa and steals some fruit from the bowl.  Wow!  What you doing here?  I moved quick … back into the villa and closed the doors whilst the monkey remained on the outside enjoying the stolen mango.

Within minutes his whole family arrived.  Mum, Dad, kids, aunties, uncles, cousins. 15 monkeys running amok in the courtyard of my villa.  They had a grand old time playing in my pool!  Who knew that monkeys like water? They were leaping in and out of the pool, sitting on the sunbeds, they stole my book and my coke … cheeky little beggars.

Eventually, I had to call someone from the Hotel to come and move them along as I really did not consider it wise to go out there by myself. 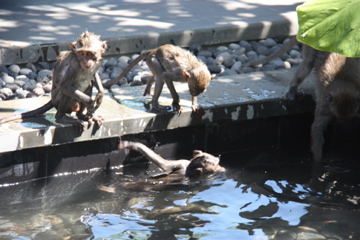 So now it was clear – on the day before, when I arrived at the Hotel, it was the monkeys who had invaded my room. I consider myself very lucky that they didn’t make off with my handbag.  That of course contained my purse, credit cards, my passport – all of the important stuff – would have been a nightmare if they had decided to empty that.

Needless to say, even after only 3 days, I managed to end up with my usual and oh so very random array of random red sunburn patches.  No rhyme or reason to how these patches are formed but it’s the same thing whenever I’m out in the sunshine.  My legs look like one of those ‘rocket’ ice lollies – bright red at the thighs, then a shade of brown/yellow to the knees – then bright white at the shins.