This week I decided to share with you another personal story.

It’s a further example of a time I found myself swimming in the ocean of fear and self-doubt.  And THIS example, probably the most terrifying of all of my experiences.  I truly was ‘in at the deep end’. 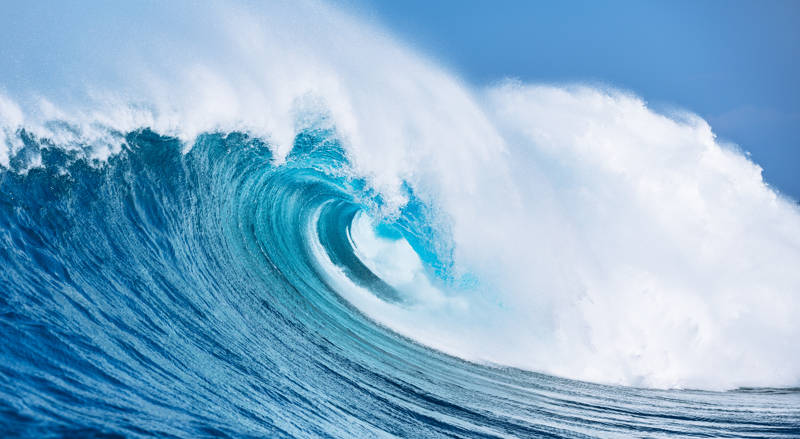 It was 2001 and I was working at Bacardi in Glasgow.  I was the Global Brand Manager on Dewar’s scotch whisky and had been since 1998.  The Company had gone through major change since the acquisition of the Brand and in 2001, a new MD was appointed to steer the business into the future.

From the moment he arrived, the new MD was clear that we should expect some major changes once he had concluded a formal review of the business – but NOTHING could have prepared me for the change he had in mind for me.  3-4 months after his arrival and having taken this time to get to know the Business, the people, the processes and the challenges…. and to formulate HIS vision of the future, he called me to his office.

He had chosen me to be his Logistics Director.  His LOGISTICS Director.  What?  I don’t ‘do’ Logistics, I do Marketing!   I explained – thinking he had been poorly informed.  But he knew what I did.  And in his words… He could see what I was capable of.   He saw something in me that I did not have the courage to see for myself.  And he wanted me as part of his Exec team – and as his Logistics Director.

From that day forward, I would be responsible for Customer Service, Planning, Materials Supply, Supplier Management, Warehousing & Distribution, and Brand Change Implementation.  Oh yes… and I would look after a team of 30 people.

It wasn’t easy.   I didn’t know the first thing about any of those topics!

And to my mind, I was none of these things.

I was an imposter.  I would fall short of all of their expectations.

About 2 months after my appointment had been announced, we broke for the Christmas holidays and so I had some time away from the office to reflect.  I couldn’t break free from the fear that had taken hold of me.  But I did make an important decision.  I decided that even though I didn’t believe (myself) that I was capable of doing what had been asked of me, I at least owed it to my new boss, to give it a go.  He had taken a huge chance on me and I wanted to prove him right.    I could at least find the courage to do that – to give it a go.  Early January 2002, I would return to the office after our 2-week seasonal break and although I knew that I was out of my depth, –  I would ‘Feel the Fear’… but still, get on with the job.

And I did.  It took at least 12 months in total for me to grow fully into that role and to ‘own’ it – but in those 12 months, I must have asked thousands of questions.  Soaking up every piece of new information I received.  Every single day during those months, I added to my knowledge as Logistics Director and as Business Leader.

And do you know what… I was a success.  We were a success.  The team achieved great results and in a few short years, the business was transformed. 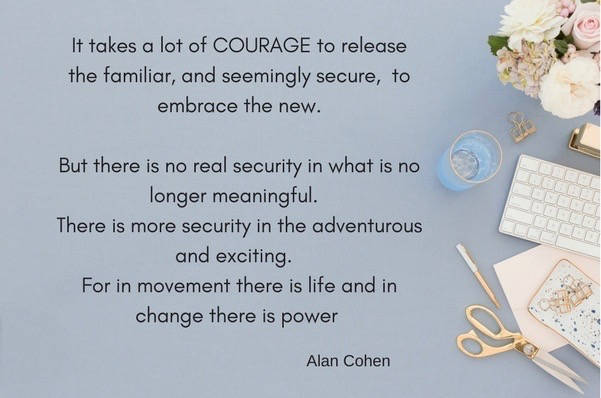 Now, in my new life as a coach, I have observed that there is one consistent emotion that prevents people from fulfilling their potential and creating the life they truly desire.  And that is FEAR.

The way in which fear manifests differs greatly person to person, but it is generally evident in some form.  To overcome fear, I invite you in this moment to consciously make a decision to live courageously every day.  Because the truth is that no matter how timid, unadventurous or cynical you THINK you are, you have within you, the ability to live with far greater courage than you have been doing until now.  Regardless of how much you have accomplished up to this moment in your life, you are capable of more.  MUCH MORE.

Ultimately, Courage has little to do with heroic acts and everything to do with the choices you make – moment by moment, day by day, right throughout the course of your life.

And I can promise you this.  As you step beyond your comfort zone onto unfamiliar ground, new possibilities will open up for you that currently lie beyond your range of vision.  Will it be uncomfortable at times?  Sure!  In fact, at time it may be terrifying.  It certainly was for me.

However, being called to do what you fear most is a direct route towards experiencing just how powerful, resourceful, brave and amazing you really are.

So, let go of having to control the outcome of your efforts, trust more deeply in yourself,  blossom into your full brilliance and in so doing, become a Leader – by inspiring others to do the same.

Until next week, sending you love xx